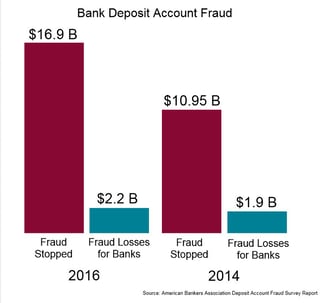 Thanks to more sophisticated fraud detection and prevention technologies, banks are getting better at stopping fraud attempts. A new report from the American Bankers Association revealed that banks were able to stop $17 billion in fraud attempts in 2016.

What that means, according to the 2017 American Bankers Association Deposit Account Fraud Survey Report, is that banks were able to prevent $9 out of $10 attempted deposit account fraud in 2016. In response to the rapidly-growing sophisticated fraud schemes, banks are integrating more technologies in order to enhance their customer protection measures. Typically, this means smarter security software, and newer technology innovations like platforms that rely on machine learning capabilities and data analytics to detect fraud faster and more accurately.

Attempted bank deposit fraud reached $19.6 billion in 2016, which was a stark increased from the $12.9 billion seen in 2014. While there was a 48 percent increase in that timeframe, fraud losses for the industry only rose roughly 16 percent — or $2.2 billion.