Synthetic identity fraud isn't a new concept, but it recently has gotten a lot of attention across the financial ecosystem. A new white paper put out by the Federal Reserve examines what's causing the problem and why it's getting worse.

Industry experts peg synthetic identity fraud as the "fastest growing type of financial crime in the United States." This type of fraud is largely underreported since may victims of this crime are children, the elderly and homeless individuals, which allows fraudsters to scale this type of fraud without being noticed as easily. This has led to bigger payouts and attracted more fraudsters to commit this type of crime.

In fact, Between 2017 and 2018, the volume of PII data exposed in data breaches increased by 126% with more than 446 million records exposed, according to the Fed's report.

As Rippleshot has detailed in its own white paper on the subject, Synthetic ID fraud allows hackers to set up accounts in a person’s name that appear to be authentic but are fictitious. The construction of new synthetic IDs is based on combining truthful and false information to build a credit file and then open new accounts, which is perpetrated at scale by opening hundreds of new accounts. Financial institutions are finding it increasingly harder to crack down on the spread of synthetic fraud since there is no actual person to report the suspicious activity.

Three factors have contributed to the rise:

In addition the the exposed PII data, The Fed's white paper shares some key stats on the impact of synthetic ID fraud over the past few years:

"Synthetic identity fraud is a growing problem in the U.S. payments ecosystem that affects consumers, small and large businesses, financial institutions, government agencies and the healthcare industry. Fraudsters are more sophisticated and organized, crime rings are run as lucrative businesses, data breaches are frequent and the availability of PII on the dark web is staggering," the Fed writes. "We expect fraudsters will continue to commit this type of crime due to the lack of victims reporting fraud, difficulty in detection and high payoffs for fraudsters – compounded by increased digitization of the financial system."

The Fed breaks down how synthetic IDs impact the payments ecosystem: 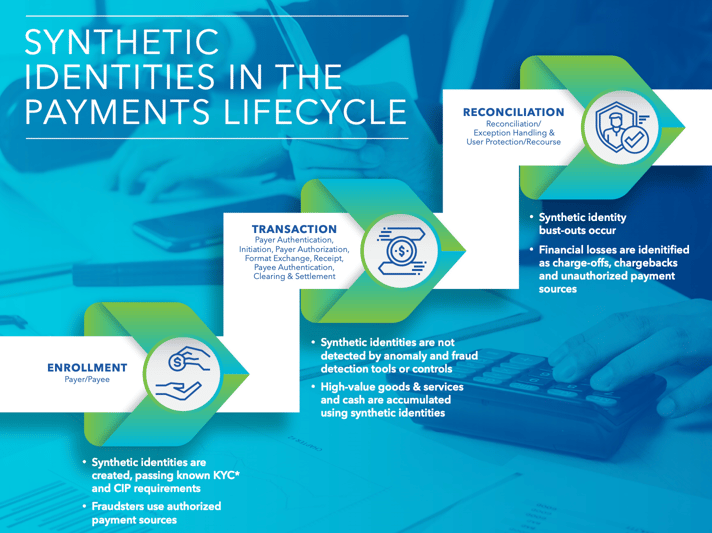 On the financial institution size, the Fed has concluded that there are a number of factors that have made this type of fraud difficult to pinpoint. For starters, there isn't a consistent method in identifying synthetic identities across industry experts. There also is a lack of resources being dedicated toward the investigation phase, the Fed notes. That, combined with lack of awareness and proper reporting about operational losses have made this problem difficult to quantify.

"It can be difficult to identify whether a charge-off, chargeback or unauthorized payment is the result of fraud or a credit loss. Once an account defaults, financial institutions may choose not to incur the cost of retrospective investigation of the delinquency causes," according to the report. Read the Fed's full report here.